Home The Best Way To Score A Game

The Best Way To Score A Game How to break down a game into its essential parts and judge it well.

Perhaps the most controversial and yet indispensable part of game reviews is the scoring system. On one hand, scoring games fails to do a game justice, yet on the other hand everyone wants a neat little score so they do not need to read. There is metacritic, which seems to be universally hated, yet still nearly everyone uses when deciding on playing a new game. In my opinion, the problem is not that scoring games is useless, although it will never be perfect, but that most scores make no sense because there is no point of reference.

For example, when someone gives a game a 7 out of 10, what does that mean? Is it equivalent to a C- as 70% would mean in grade school, or does it mean it’s better than 7 out of 10 games with the average game getting a 5 out of 10? The average scoring system lacks objectivity because how the scoring system is supposed to work is unclear.

Thus, here at Reaxxion, as we strive to be as transparent and clear as possible, I’ve developed my own schema to properly asses games according to what I think their most important parts are. You can see the picture above, and I choose a pyramid to illustrate the relative weight I give to each category. Let’s go into some detail.

At the bottom of the pyramid, gameplay represents the base of the structure upon which all other elements rest upon. Gameplay is how the user completes the given tasks and objectives in the game. Good gameplay is marked by creative and challenging tasks. There are many types of gameplay, known as the gaming genres: FPS, RTS, Exploration, Adventure, Survival, MOBA, RPG, Platformer, etc. I hold gameplay to be the most important part of a game, since it doesn’t matter how pretty or developed a game is if the gameplay sucks then the game sucks.

Great example of this? Doom 3. The game controlled well, was pretty and atmospheric, the sound was amazing, and even the story of how a base got infested by demons was engaging pulp fiction. But the problem with the game? It wasn’t any different or better than Doom 1. It was the same gameplay as the old pixel Doom, yet in fact many ways worse since it was insanely easy and lacked the huge depth of levels the old Doom 1 had. The game was short, had no replay value, and harder difficulty levels didn’t make the game more challenging except by having monsters kill you in one or two hits. To beat harder difficulty levels involved nothing but trial and error, dying to monsters hidden around a corner and then reloading with the advance knowledge of the monsters location that just killed you two seconds ago.

Gameplay is ultimately the only thing that truly matters. Even a game that looks simple, yet has incredible gameplay, can last forever. That’s why people still play Tetris and Street Fighter II.

Controls are a simple yet essential part of a game. There is nothing more frustrating than being unable to control your character or hit the enemies with attacks. Or, for strategy games, poor control is when there are so many damn menus to navigate the game becomes a chore. A game should be simple and clean to operate. No need to practice learning the controls for more than four hours, or else it’s a flawed game. A great example of how good controls can radically improve a game is Legend of Zelda: Ocarina of Time, as the z-targeting system set the standard for 3D exploration and combat for a very long time. Nintendo deserves special mention in always trying to innovate with controls as shown by their Wii and Virtual Boy systems.

While usually receiving most of the attention for a new game, graphics are actually fairly unimportant and are mostly hype. Sometimes, however, graphics are great for conveying new types of gameplay, such as when Mario went from 2D to 3D. Having a 3D world opened up a whole new range of gameplay types that a 2D graphical interface could not explore. Yet, this is also part of the gameplay rating and not the graphics.

Strictly speaking, graphics are the game’s visual presentation. Games that try to look “realistic” are not that good, graphically. What is considered “good graphics” by today’s standards will be considered garbage in 10 years from now. True good graphics involve actual artwork, not just the best 3D rendering software. That’s why Donkey Kong Country, which was considered state of the art back in 1994, looks like a cartoon with it’s attempted 3D “realistic” graphics. Now I’m not saying Donkey Kong Country looks terrible, yet look at Yoshi’s Island, which was nothing more than pure 2D artwork, and it looks just as amazing and fresh today as it did back then.

Thus, good graphics should be evaluated on the entire visual presentation, and reviewers should avoid being swept away by graphics because “it looks realer than the games before it.” Good graphics are timeless, bad graphics are hyped and fade with improved technology. 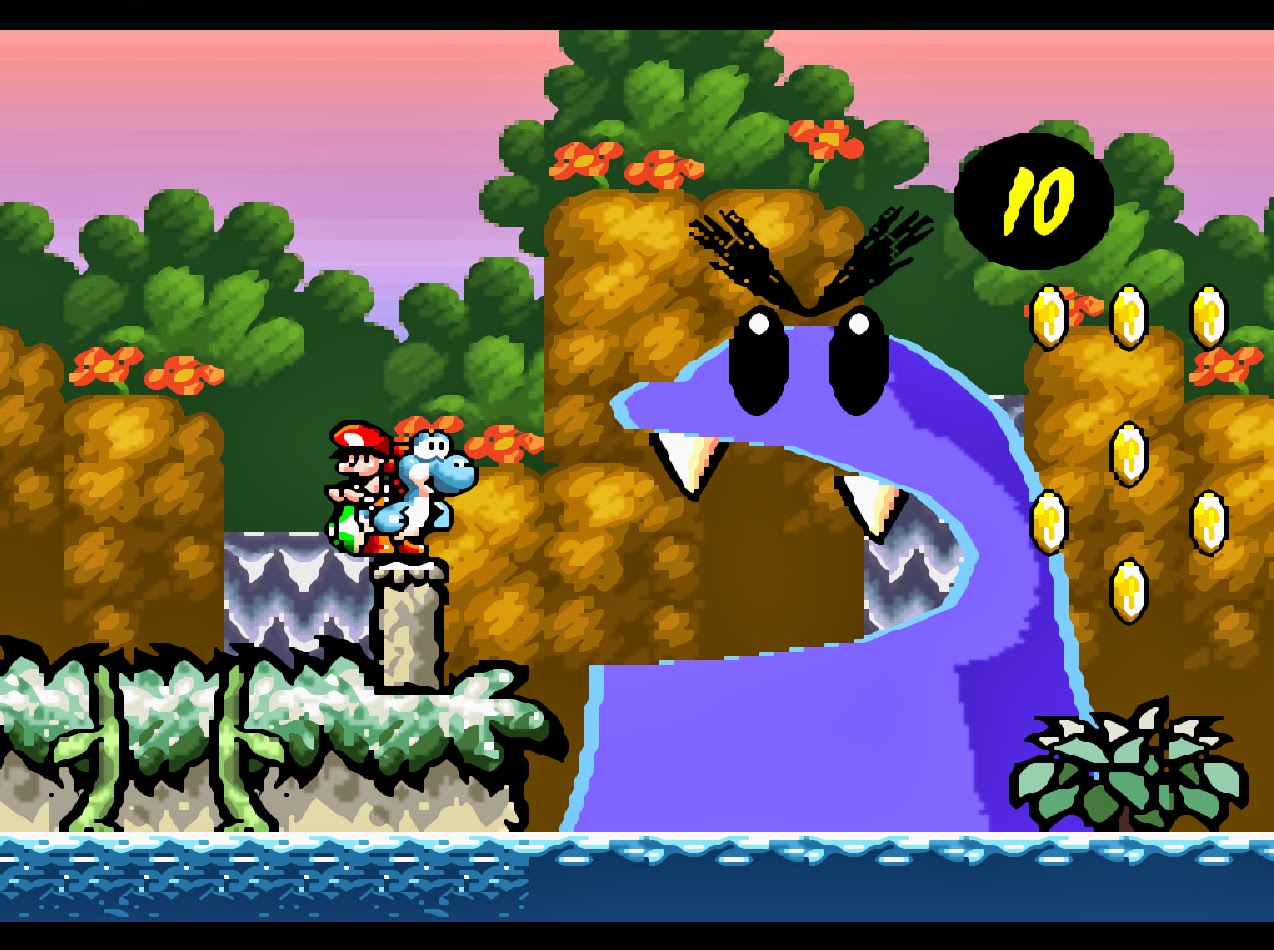 Hard to believe this is 16-bit…

Although I love great soundtracks, a good game can be played with the sound off and not suffer too much. The exceptions to this are when sound is an essential part of the gameplay (listening for the enemies, for example), but ultimately good sound is hardly necessary for a game.

Usually what makes a sound track memorable isn’t just the sound quality itself, but the game that is played alongside it. Final Fantasy games have great soundtracks, yet if those soundtracks were released purely as a musical it wouldn’t be anything special or famous. Instead, it’s the great game that makes the music so well known. Still, it’s usually obvious to spot good soundtracks from bad tracks.

Finally, there is story, which is really just icing on the cake. Let’s be honest: no one needs a reason to play the game if the game is fun. The plot never matters. Many, if not most, gamers skip through the plot scenes just so they can save time. Gamers don’t care if they are the good guy or the bad guy. They just want to play, have fun, and win.

Mario games are one of the most successful game series in the world, and yet every single Mario game involves saving the princess from the evil Bowser. The plot is banal, yet Mario games continue to receive great sales and reviews despite the recycled plot. The reason why? Because video game plots are usually irrelevant, and most people know this. If you want a good story, go read a novel. Conversely, having a cool and engaging story cannot even begin to attempt to make up for a lousy game.

To use this pyramid rating system, let’s talk about a game we all know: Mario Kart for the SNES. How would this game get rated?

Gameplay – Awesome. Original and groundbreaking for the time. Still great fun by today’s standards, hasn’t really diminished with time. A full 45% is given here.

Controls – Takes some getting used to. Many newbies will spend a lot of time off the track because cornering and power sliding can be very difficult. The end stages such as Rainbow road are extremely difficult due to controls being so tough. Due to this, only 20% is scored here.

Graphics – Very cool art. Makes full use of SNES’s mode 7 technology. Has aged well. Backgrounds are a bit bland, however. I’ll give it 13%.

Sound – Fun sounds, but a bit repetitive. Sets the mood of the game into a positive experience. 8%.

Story – None. Who cares? Cartoon characters racing around. Whatever. 0%

86% may sound low to you, but keep in mind today’s average game would bomb so hard in the gameplay category that most games today would be lucky to break 70%.

Let’s do another one: Resident Evil 2. Gameplay – Decent but flawed in key areas. Most of game is exploration and trial and error combat. Fights can be very difficult and the save system is limited, so if you die you’ll be replaying a lot of content, wasting your time. Corrects a lot of problems from Resident Evil 1 but the gameplay mechanics of survival horror are basically the same, which isn’t a bad thing.

Item combo system a plus, but having to pull up the menu system over and over is a chore. Combating enemies usually involves knowing their patterns and exploiting them. Can be a thrill to survive difficult fights. 20%.

Controls – Pretty awful. The “tank” control schema of turning your character on a pivot makes combat awkward and frustrating. It can be very difficult to see where your character is aiming his gun, or turning quickly to shoot the dog running in circles around you. On top of that, the fixed camera positioning can be very clumsy, which means every time the player enters a new room the player must reorient themselves in order to figure out what direction “left” is when he inputs left on the controller. Takes longer than 4 hours to master. 5%.

Graphics – Garbage by today’s standards, yet great for their time. The pre-rendered backgrounds have aged well, but the characters themselves look blocky and pixelated. Overall not anything to complain about given the age of the game, but there could have been more effort into making the game use a real artwork instead of pretending to be “realistic.” 7%.

Sound – Very atmospheric and moody. Gives the game great ambience and a palpable sense of dread. Monsters and zombies make weird noises that put the player on edge. Flawless. 10%.

Story – Oddly engaging plot of an evil corporation that somehow produces a zombie virus. Decent themes of human greed and corruption. Good enough of a plot to be turned into a movie. Full score. 5%.

These are my gaming biases. I put gameplay first because I am a gaming elitist. I’ve played competitively before over many games and look forward to doing so in the future. Then come controls, graphics, sound, and story.

Now, this obviously does not apply to all gamers, but I do think it will apply to most of them. My scoring system will let the average player know if it is a fun game or not. Still there will be gamers who disagree with my methods. For example, many gamers give equal weight to all categories. I would call those the “equality” gamers.Then you’ve got the “atmosphere” gamers, who usually stick to RPGs, and they would probably rank story at the bottom of the pyramid, followed by graphics, sound, gameplay, then controls at the top. There are many types of gamers out there.

Regardless, these are my biases, and you’ll understand where I’m coming from when I review a game. What are you gaming biases?

Read Next: The Pettiness Of Game Reviewers

Nov 25, 2014David Samra
Full Review Of Persona Q: Shadows Of The LabyrinthMicrosoft Hates You (But Sure Loves Your Money)