Home 5 Things You Should Know About Young Gamers

5 Things You Should Know About Young Gamers

Over the past 10 years, the people who play video games have changed more drastically than the games themselves. In the older generation, gamers were thought to be fat nerds or skinny fat nerds with glasses and pimples. This stereotype no longer applies because just about everyone plays games now. And this doesn’t necessarily apply to traditional gaming consoles, either.

One of the driving forces in the rise of gamers is the young generation of today: people 22 and younger. It is with this generation that video games exploded in popular culture. For example, one of the most popular genre’s on YouTube is video games, specifically Let’s Play videos. For those that don’t know what that is, it’s someone, or a group of people, recording their playing of a certain game with reactions and commentaries. Now that more people are becoming aware of video games and the community, I think that there are five things people need to know about young gamers:

1. Call Of Duty Kids Don’t Represent All Of Us 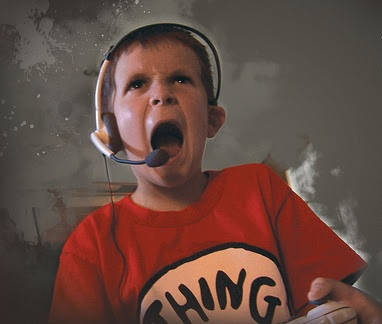 Their voices are so high pitched

The young 12 year olds who cry on Call of Duty do not classify the entire community. These kids are well known for their high pitched cussing, raging, and overall whining over the game. It’s important to know that kids like these are all over multiplayer games, but they are more easily found in Call of Duty because of its mainstream popularity and success.

The overall online experience of the series is downgraded thanks to these kids. If you detach this group from the online world, you can see that most people are friendly and helpful if not completely quiet, as more than 50% of online players don’t even use a microphone. Just like the real world, there’s a wide range of people online who shouldn’t be viewed under the same light.

She must have eyes on the back of her head

Times are changing. With all the controversy from gamergate, it can be hard to tell fact from fiction. However, there is some truth in the anti-gamergate point that girls are now a bigger part of gaming. With a wide variety of games to choose from that different audiences, it’s no surprise that girls are starting to get into the culture.

These aren’t the girls that just want to get the attention of guys by playing—they spend hundreds of hours a week logging in hours on Team Fortress 2, League of Legends, and the other powerhouses of free-to-play games. Personally, I don’t think this is a bad thing. The more the merrier I always say, so it’s important to know that when someone talks about gamers, they aren’t just referring to guys anymore.

3. We’re Not All Socially Awkward

With the exception of hardcore or professional gamers, it’s important to understand that young gamers don’t lock themselves in their houses to play all day. They have things to deal with in the real world, like going to work, school, parties, clubs, the gym, social events, and so on. Like I said in number two, times are changing—you don’t have to be a nerd or loser to love games. You can be from any social group, play for any number of hours, and still be a gamer. The term is broadening.

4. Streaming Is Important For Young Gamers Around The World

Streaming is not my forte

Game streaming is a relatively new concept in the world of entertainment. For those that don’t know, Live Streaming is when someone records their gameplay as they play while spectators watch from the web. This feature was made popular on YouTube and Twitch.

Americans and others from 1st world countries might think of this as stupid. I mean come on: who would want to watch someone playing when you could just play yourself? If we eliminate the idea of personal preference, people need to understand that 3rd world countries do not share the luxury we have when it comes to gaming. There are countries that have banned games and even consoles from the market altogether. For gamers in these countries, the closest they can get to playing is by watching someone else play. For example, in China, the Xbox One was the first console to be available for sale in more than 20 years. This is just one example of the difficulty gamers face in other countries.

I could send hours and pages giving my own opinion on the matter, but instead I’d like to use research and evidence to back up this claim. An article by ScienceAlert reveals that there has been no solid evidence that links violence in video games and youth violence. In fact, the only possible link they could find was a decrease in youth violence when compared to video game violence, which makes sense since it could be seen as a sort of outlet for young gamers.

Being the first long-term study, this information is crucial in the debate on video game violence. Games should no longer be a scapegoat for politicians and helicopter parents to blame for the tragedies that happen in the U.S. and other nations.

Eventually, young gamers will grow up, and a new generation will emerge with Oculus Rift and virtual reality. When that day comes, stereotypes of young gamers will change, and old people will have something new to brag about. Until then, it looks everyone will have to deal with the crying on Call of Duty.

Read More: A Gaming Website For Gamers Is Now A Taboo

Nov 20, 2014Cy Ezra
3 Ways Game Reviewers Are Bribed To Lie To You3 Dreamcast Titles That Were Ahead of Their Time